These lectures are aimed at educating Muslims and non-Muslims about what Shari‘ah is, how it is practiced in the U.S., constitutional issues surrounding a potential ban, and the effects a ban would have on religious freedom in America. 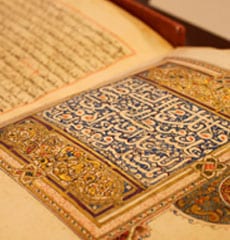 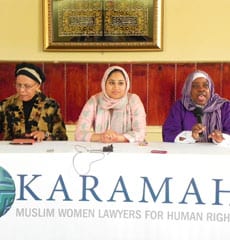 KARAMAH Presents Our Lecture Series on:

Islam, Shari’ah and Religious Freedom in the U.S.

Islamic law is a rich and diverse tradition of legal thought that has been used for centuries across the globe. Shari’ah shares many core values with the American legal system, but a lack of public knowledge about Islam has allowed a small group of individuals to spread fear and misinformation about this tradition. The lack of quality information about Islamic law has led to waves of anti-Shari’ah sentiments, some of which have infringed on the civil rights of American-Muslims.

The recent wave of anti-Shari‘ah sentiment, marked by moves in several states to outlaw Shari‘ah, is based on misinformation about Shari‘ah in particular and Islam in general. In order to address these misunderstandings, KARAMAH is presenting a lecture series on Islam, Shari’ah and Religious Freedom in the U.S. These lectures are aimed at educating Muslims and non-Muslims about what Shari‘ah is, how it is practiced in the U.S., constitutional issues surrounding a potential ban, and the effects a ban would have on religious freedom in America.

KARAMAH Speaks about Islam, Shari’ah and Religious Freedom at the Islamic Center of Long Island, NY

On Monday, October 17, 2011, KARAMAH, in collaboration with Women in Islam, held a town hall meeting at The Schomburg Center for Research in Black Culture in New York. The event featured: Rev. Dr. James Forbes, Dr. Azizah al-Hibri, and Prof. Theodore Shaw and was moderated by Anisa Mehdi.

During this event, panelists discussed misconceptions that drive anti-Islamic and anti-Shari’ah sentiments, explaining what Shari’ah is, how it is practiced in the U.S., civil rights implications of recent efforts to ban Shari’ah, and the importance of interfaith cooperation on these issues. Panelists also denounced religious intolerance and gave examples from the Bible and the life of Prophet Mohammad calling for acceptance of the Other on the basis of justice, compassion and tolerance.

KARAMAH Speaks about Islam, Shari’ah and Religious Freedom at the Islamic Center of Long Island, NY.

On October 2, 2011, KARAMAH held a town hall meeting at the Islamic Center of Long Island, NY, featuring Mr. Abed Awad, Ms. Engy Abdelkader, Reverend Mark Lukens. During this event, scholars and experts explained what Shari’ah is, how it is practiced in the U.S., constitutional issues surrounding a potential ban, and the effects a ban would have on religious freedom in America. The meeting was attended by an interfaith audience; both men and women from the different faiths.

Mr. Abed Awad discussed the background of Islamic law (Shari’ah), that it is “a process to construct divine meaning and ascertain divine will.” Then he explained why religious law is relevant in American courts by providing relevant examples about how it is brought in as foreign law and that it often serves as extrinsic evidence.

Ms. Abdelkader said that while people are afraid that Islamic Law will infiltrate the American legal system, we have to remember that 1) we have a constitution that protects us from this, and 2) not all that we see abroad is Islam (as understood by all Muslims). She also explained that all that we see in the media is people manipulating a doctrine to further their own agenda.

Reverend Mark explained parallels in Canon law. He also explained how this legislation is “an offense to humanity and a stain on our nation.”

Mr. David Newman from the Jewish Community Relations Council of Long Island also joined the discussion. He talked about Halakha (Jewish law) and the idea of a Ketuba (Jewish marriage contract) and the get, which a woman has to receive for the divorce to be finalized and other issues relating to the Jewish community.

The panelists agreed that the anti-Shari’ah wave is political an ideological and that we need to educate ourselves and others about this issue. Ms. Ailya Vajid described the event as being “very powerful and moving and reminded us of what America claims to be.”

In the Spring of 2011, a bill was introduced in the Tennessee Legislature to make the practice of Shari’ah a felony in Tennessee. On September 22, 2011, KARAMAH along with other organizations co-sponsored a town hall meeting at the Church of the Savior in Knoxville, TN.

The event revolved around “Islamic Shari’ah and the American Constitution” and aimed at discussing what Shari’ah is and at dispelling misconceptions about it. The event was marked by the attendance of an interfaith audience and a very good atmosphere of interfaith understanding and collegiality. Myths and misperceptions about Islam and Shari’ah were put forward and overturned.

Do you have questions about Islam or Islamic law?   View previously asked questions